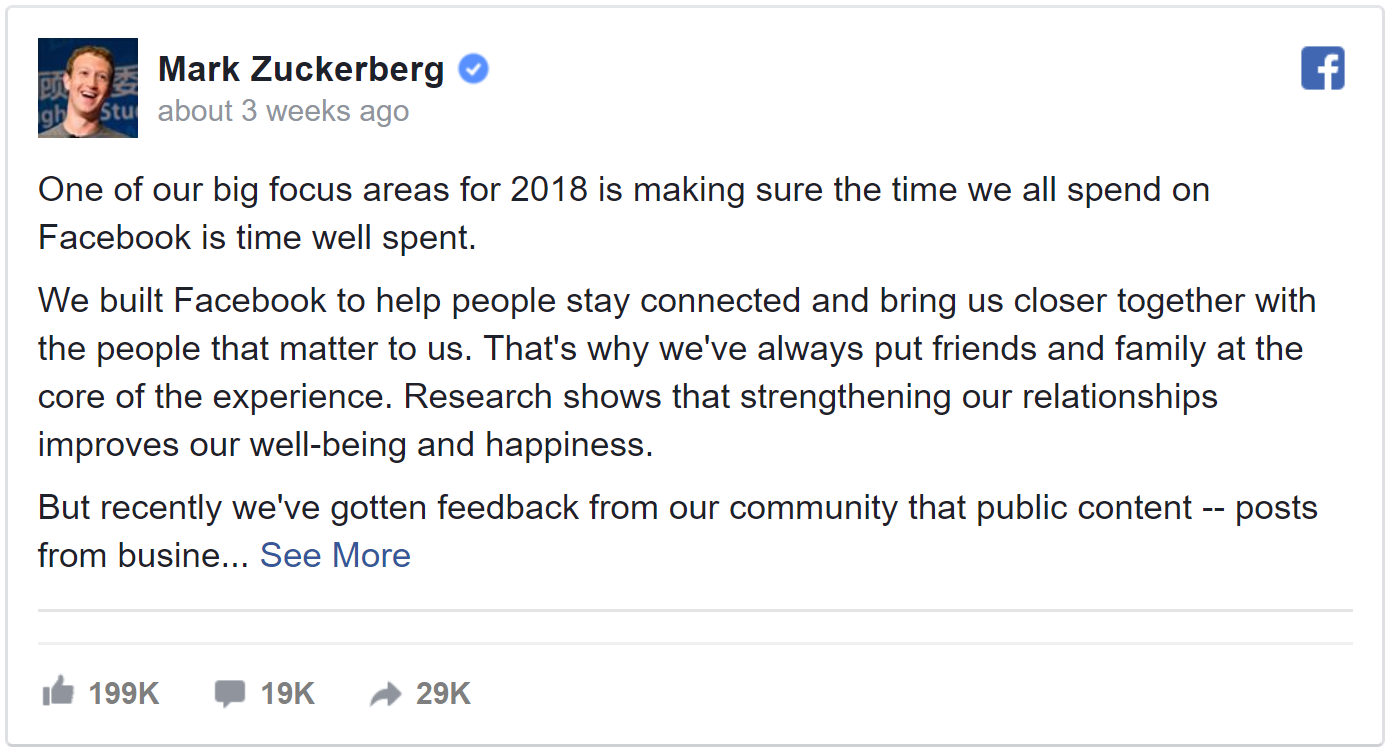 In case you haven’t heard the uproar or haven’t had a chance to read through all the opinions about how this will crash the internet, we’ve compiled a list of major sources who have published their take on feedpocalypse.

HootSuite didn’t try and forecast how this would change things, instead, they provided suggestions for marketers to mitigate the loss of visibility and traffic from their organic Facebook efforts. Some good advice here, basically keep doing what you’ve been doing and double down on quality content, video, and ads.

Forbes calls out the likely impact this will have on the Instagram feed algorithm as well given that it is reflecting similarities to the Facebook algorithm daily. They also call out the importance of influencers and I think they’re right. Influencers are going to be more powerful than ever in social marketing and brands who can figure out how to leverage them will be ahead of the game.

‘Awesome dynamic’: Influencer marketing gets a boost with Facebook changes from Digiday

Digiday agrees with Forbes about the influencer boost and opportunity but points out that influencers were required to switch to business pages. So influencers may be included in the new content suppression rules.

Facebook Is Changing. What Does That Mean for Your News Feed? From The New York Times

The New York Times reported from the user perspective with a fairly cut and dry synopsis of the change slanted positively in favor of Facebook users. This article made me wonder how Facebook users at large feel about Facebook dictating the content they will see and the content that will be suppressed. Interesting.

Reporting from the Facebook ads side of things, Susan Wenograd isn’t too concerned. She doesn’t believe that organic reach on Facebook was a major player in social marketing programs, to begin with. So this shouldn’t cause a flood of new advertisers or budget into the Facebook Ads auctions. We’ll see, I tend to disagree that organic was not a major contributor for some hyperactive, customer-centric, and creative brands.

There you have it, perspectives on the Facebook newsfeed algorithm changes from around the web. I’m definitely seeing more posts from Facebook groups that I’m a part of. Have you noticed the changes yet? What are your predictions?

About the author : Heather Cooan

Heather is an entrepreneur, author, international speaker, & an ex-roller girl. She founded HDC Digital, a Phoenix-based digital & demand marketing agency revolutionizing the way companies think about and approach growth. Over her career, Heather has served in digital marketing roles both in-house and agency-side, spanning the full funnel, across many verticals, both lead generation, and eCommerce. Credits include The Smithsonian, UGG Australia, Teva, Google, PapaJohns, ISOTONER, Totes, ESET, PetSmart, Infusionsoft, and numerous others.

This site uses Akismet to reduce spam. Learn how your comment data is processed.